MasterClass Moving On: Academy round up for 2017

As the 16th year of our Parkinson’s MasterClass(es) draws to a close it is time to take stock and reflect on 2017: more MasterClasses, more audits and two ‘Firsts’. Add to that NICE publishing new (well nearly new) guidelines, the World Parkinson’s Congress blog and the growing agenda around repurposing drugs and all in all it has been a busy old year.If I’ve said it once I’ve said it a thousand times but back in 2002 we thought we would only ever do a couple of Parkinson's MasterClasses. For 2018 we are fully booked and so oversubscribed for the Foundation MasterClass that we are thinking of how we might do things differently. The Dementia and Palliative Care MasterClasses have direct lineage back to the Parkinson’s MasterClass and like the MS MasterClass have replicated the best bits of how to facilitate learning among participants, at least to start with. Now, they have tried different ways of doing things and the Parkinson's MasterClass, at least the Foundation variant, will be learning from our sister MasterClasses in 2018 pending more changes in 2019.So a new year, new MasterClasses and new ways of doing things. What’s not to like?* * *

Almost since the inception of the Parkinson’s Academy MasterClasses November has seen us host the second module of the Advanced MasterClass, this year MasterClass 32A. As ever participants returned with a wide range of projects that are being written up for the website. In the case of two participants who could not make it through distance (New Zealand) or personal circumstances (new baby) each provided a PowerPoint presentation with a voice over – quite surreal.Since we met in mid-June five participants have moved into the consultant grade and are experiencing ‘the comfort zone and new roles’ change curve at first hand. As ever the ‘peak of inflated expectations’ is a dot in the wing mirrors while trying to steer towards the plateau of productivity without passing through, let alone becoming mired in the trough of disillusionment. Thus, among some fabulous presentations were a number of scoping projects just looking at what was ‘on the ground’, what needed doing and what might be achieved quickly. This is exactly how one builds a service over years – very different to an audit project during a 12 month ST attachment. 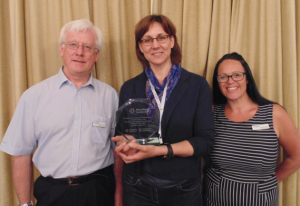 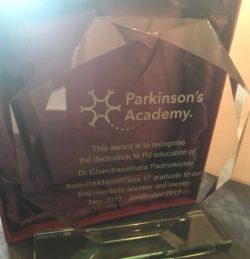 Dr Chandrasekhara Padmakumar's award[/caption]Just three months later it was a pleasure to recognise alumnus and first overseas mentor Dr Chandrasekhara Padmakumar’s connections with and contributions to the MasterClass when he visited us in September on his way to the Royal College of Physicians of Edinburgh ‘Parkinson's Disease 200: Back to the Future’ conference. While with us he spoke on Foundation MasterClass 33F on: ‘Do non-motor symptoms impact on quality of life & does it really matter?'. In doing so Padma became our first overseas speaker and an alumnus at that! Meanwhile back in Newcastle, New South Wales his original MasterClass aims and objectives have flourished. His Parkinson's service continues to grow, he has built sound links with like-minded colleagues in neurology in Newcastle and Sydney and with geriatricians developing new Parkinson's services all over Australia. Moreover in 2014 and 2017 he hosted major conferences on Parkinson's which this year involved patient groups too. Congratulations Padma.[caption id="attachment_3988" align="aligncenter" width="400"] 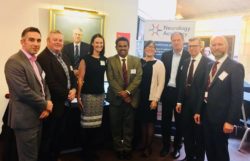 The revised version of the 2016 NICE guidelines were finally published in June 2017. Frankly not a lot has changed, e.g. around diagnosis (clinical) and neuroprotection (nothing achieves this). More specifically those drugs having the fewest benefits yet the most side effects are even more discouraged than previously, e.g. the dopamine agonists with all sorts of caveats over informing patients and providing written information for example. Meanwhile those that are more effective can be used although how and in what order remains a decision made by the person with Parkinson’s (PwP) and their specialist. It is certainly true that following PDMED Ldopa has a better tail-wind than in 2006.Following initial doubts in a draft guidelines version this permissive approach includes the non-oral therapies including apomorphine and duodopa although when and how to use these therapies is very specifically defined.For reasons that do not appear to be entirely evidence based modafinil (for excessive daytime somnolence) and melatonin (for REM behavioural disorder) are recommended. So too is effective but very expensive glycopyrronium. That said as is often the case GPs will prescribe if it is in a sensible agreed pathway.A new section deals with nutrition but little is included re exercise apart from revisiting previous 2006 advice re physiotherapy and occupational therapy.

In the last year or so two new drugs have been licensed both of which belong to existing drug classes each with existing treatments within them. Each has advantages and clinicians will have to decide how and where they position them but once again NICE is permissive.Opicapone is as good as entacapone but really helpfully it is taken only once a day. On the other hand, entacapone is often wrapped up with Ldopa in a combination preparation such as Stalevo, Sastravi or Stanek. Neither entacapone nor opicapone is as powerful as tolcapone but then again neither has tolcapone’s side effects or restrictions in terms of prescribing.Safinamide does what rasagiline does but with less dyskinesia. Therein lies its positioning in any bid for funding in that anything that delays progression to non-oral therapies is immediately reducing [net] costs.

Very recent and very exciting is the ‘re-purposing’ agenda which examines existing medications used in other disease areas whose safety has already been established, thus saving five to ten years of trial work. The trick is to trial them to see whether they help people with Parkinson's or may even influence disease progression. Exenatide, simvastatin, trazodone, nilotinib and isradipine are examples.Another angle on this is to take existing Parkinson's drugs and deliver them by different routes to get around problems with gastroparesis. Exciting possibilities although not yet fully realised have in some cases reached phase III studies. Re-purposed delivery routes include the inhalation, patch and sublingual routes.

The World Parkinson’s Congress held its fourth three-yearly conference last year and I mentioned the 2016 meeting in Moving On this time last year. This is a unique coming together of clinicians, scientists and people with Parkinson’s (PwP). The scientists and PwP rarely meet in other settings so this meeting is truly a unique opportunity to do so. Do look at the 2016 programme and in particular the YouTube videos featuring PwP cycling, boxing, running, dancing and more!In advance of the fifth conference in Kyoto in 2019 there is a very active blog which I commend to you. Have a look, there is a variety of blogs including a piece from Professor Roger Barker on stem cells. My point is that the blog contains short pithy well written pieces that are absolutely on the edge rather than even being on a poster! I nag you to go speak at patient meetings and the blog contains the very material that our patients want to hear about. I commend it to you and you may even feel compelled to scribble a few lines yourself.

Which brings me to our charities. Parkinson’s UK’s network of branches is truly awesome and any offer to go and speak will result in arm-bitten-off syndrome. For those in new consultant posts getting to know those in your branch is a great way of recruiting allies. Many branches strive to maintain a balance between their members many wishes and aspirations. What everyone shares [with you] is the desire to see local services flourish under the leadership of you and your colleagues.Parkinson’s UK also has an enviable range of written materials at the disposal of anyone who simply searches their website. In clinic, I point people with Parkinson's and their families to the Parkinson's UK website and again in the clinic letter which I cc to them. I do so first because it is very good and second because nature abhors a vacuum and other sites of varying quality, will be accessed.The Cure Parkinson’s Trust (CPT) is the other Parkinson's charity in the UK albeit much smaller. That said it is a formidable fund raiser and I have to declare an interest in that I am a Trustee. It has gained a lot of publicity this year although in part sadly through the death of its President and co-founder Tom Isaacs.While I am in awe of what Parkinson’s UK does for patients and indeed funding research, CPT’s only mission is to fund research and through other sister research networks they really do punch above their weight in terms of what they fund and how. Note repurposing drugs is very much one of their priorities and something I remember discussing with Tom years ago. So, what has this to do with us? Well, my view is that CPT is breaking new ground in that its research is being published and reaching the stage where Phase III studies will be needed to move things on. That is where front line jobbing Parkinson’s specialists like you will be vital to recruitment in numbers, so watch out for that CPT research invite pinging into your inbox.Other charities merit mention. The Alzheimer’s Society can be invaluable in helping to support our Parkinson's patients who develop dementia. Meanwhile Age UK advisors can be incredibly helpful when for example completing benefits forms.

Which leads me on to one of my hobby horses. Drugs will only do what drugs will do. People with Parkinson’s are complex but getting the basics right makes the biggest difference. It is tempting to worry over drugs’ absorption and the effect of certain proteins, yet from a whole-body perspective calorie control, maintaining a healthy weight and in particular exercising are almost always more important. Add to that an annual eye check and if necessary a hearing test too. Also, a review of any new symptoms is important as other diagnoses are both available and indeed commoner as we age. Finally smoking is the biggest preventable threat to global health and limits duration and quality of life in a way that chronic conditions like Parkinson’s, for most people, do not even come close to replicating. Of course do all the right things but as we say in clinical practice – first, do no harm.

And finally, a name check for the British Geriatrics Society Movement Disorder Section which is the longest running Section in the BGS. You can access information by signing up through the BGS website or via the Movement Disorder Section website itself. I was the Chair hundreds of years ago but the baton has just passed from Faculty member Richard Genever to Emily Henderson. Do have a look at the website and I look forward to seeing you at one of our CPD meetings.Read the full Neurology Academy 2017 newsletter here