01 Oct 2018
Awards & nominations
The Cure Parkinson’s Trust (CPT) and Van Andel Research Institute (VARI) have announced Simon Stott Ph.D., and Bastiaan Bloem M.D., Ph.D., as the recipients of this year’s Tom Isaacs Award, set up in memory of the late CPT co-founder and President who passed away in May 2017. The award recognises an inspirational researcher who has demonstrated the greatest impact on the lives of people living with Parkinson’s and/or has involved people with Parkinson’s in a participatory way in their work.[caption id="attachment_5305" align="alignright" width="192"] 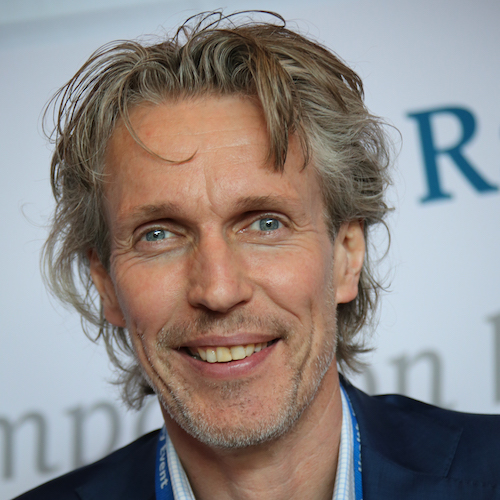 Prof Bastiaan Bloem[/caption]Professor Bastiaan Bloem is the founder and medical director of Parkinson Center Nijmegen and co-director of ParkinsonNet at Radboud University Medical Center in the Netherlands. This online platform is a new, innovative model of patient-centred care and self education, and ensures effective communication between the individual with Parkinson’s and their integrated healthcare team.

“Dr Bloem is deeply committed to collaborating closely with people with Parkinson’s in all aspects of his work — a fact that was important to Tom and that should be a shining example to us all. Through his efforts with ParkinsonNet, people with Parkinson’s in the Netherlands and a growing number of other countries are able to much more easily access specialised care needed to ensure quality of life.” Professor Patrik Brundin, Associate Director of Research at VARI and Tom Isaacs Award judging panellist. 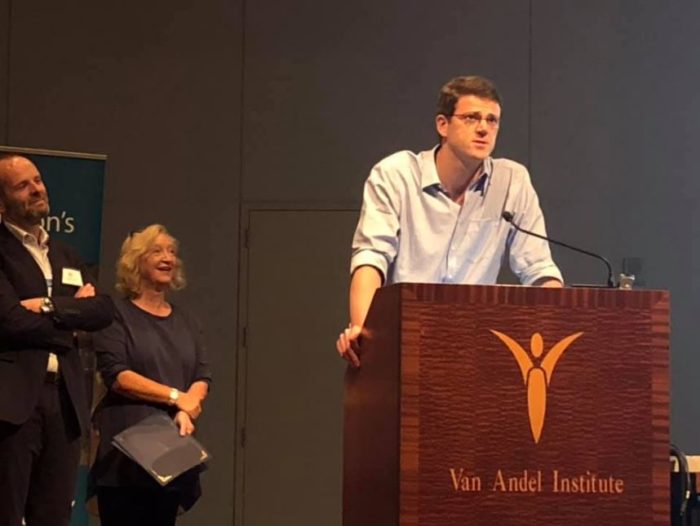 Dr Simon Stott at the awards ceremony 2018[/caption]Dr Simon Stott is a research associate in the lab of Prof Roger Barker at Cambridge Centre for Brain Repair, Cambridge University, and is an active member of the Parkinson’s Research Advocacy Group. Since 2015, Stott has run the ‘Science of Parkinson’s’ website in his limited spare time, which is dedicated to translating the complex science behind the disease into an accessible, patient-friendly format.

“Dr Stott’s dedication to the Parkinson’s community goes far beyond his day job as a neuroscientist,” says Patrik Brundin. “His blog has become an indispensable and outstanding tool for communicating the latest research to a broad audience in an interactive, easy-to understand way, and creates a much-needed bridge between the lab and patients. In a short time, he has developed a global following via his blog and other social media outlets.”

CPT is thrilled to announce both winners this year, and recognise them for their outstanding achievements. Both recipients are tireless advocates for the Parkinson’s community, whose inclusive work and extensive outreach helps shrink the gap between scientists and patients. Tom Isaacs, who became one of the best known patient advocates for Parkinson’s in the world, believed passionately in this patient-centred approach and the Tom Isaacs Award is dedicated to his spirit and determination.The award has been presented on 27 September at the annual Grand Challenges in Parkinson’s and Rallying to the Challenge meeting in Grand Rapids, Michigan.[caption id="attachment_5303" align="alignright" width="900"] 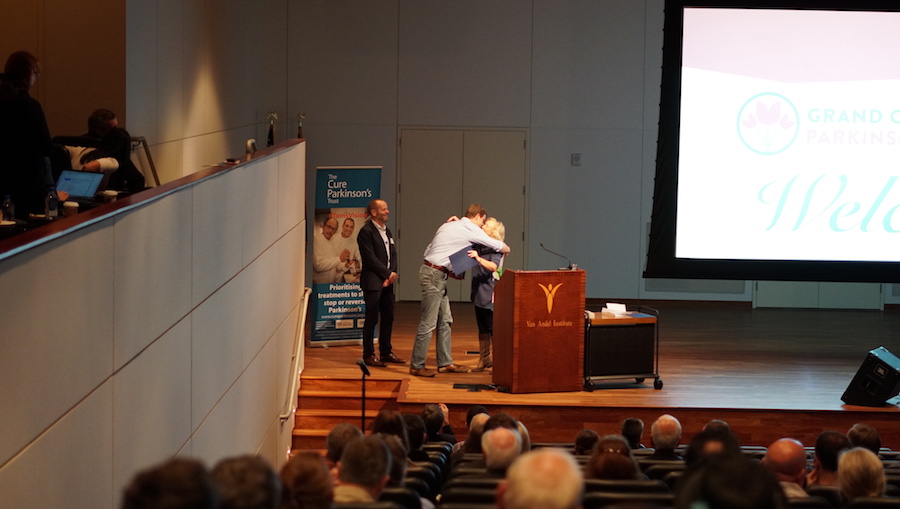 Tom Isaacs Award 2018 ceremony at the annual Grand Challenges in Parkinson’s and Rallying to the Challenge meeting in Grand Rapids, Michigan[/caption]