An interview with Natasha Hoyle: this year’s Raising the Bar poster winner

What started as an intermodule project for an MS MasterClass has proven an invaluable source of information about the local disease-modifying treatment service, and the winning poster for this year’s Raising the Bar conference highlights some of Natasha’s findings in her second year of auditing.

Natasha talked to us about the scale of the work, her learning along the way, and shared some insights to encourage and enable others to carry out similar auditing of their own practice.

When thinking about an audit, the scale of the task can be daunting. Nastasha explained that in her first audit, she used six forms of data, including homecare records and day case appointment books, and noted that collating and interpreting it ‘wasn’t difficult, just time-consuming’.

‘It was so much quicker this year – I’ve learned a lot about where to get the data from that I need, and how to keep good files.’

This year, due to better record keeping, Natasha was able to use fewer sources of data to gather the same information. She used a mixture of Blueteq data, pharmacy dispensing records and their in-house DMT database, ‘Infoflex’. 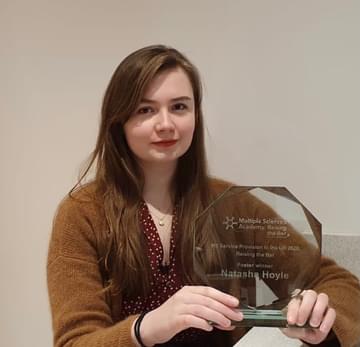 Natasha explained that the whole team had really benefited from the audit, both in terms of understanding where they could work on improvements, as well as being encouraged in what was going well.

‘It was brilliant to encourage the team with some of our findings – like people who choose natalizumab only wait one week from decision to treatment – that’s really rewarding to see.’

One of these areas of encouragement was understanding the reasons for delay. Leaving this information off her poster as the data was from a smaller sample and therefore not as reliable as the other data she reported on, it was nevertheless very significant to her team. In her previous year’s audit, Natasha had been unable to find the reasons for delay between choice and treatment.

‘Finding out that 50% of the delay from decision time to treatment is patient-led was really motivating for us. We forget that people have work, lives; they’re not just sitting waiting for us to deliver their medication!’

This year, with a DMT coordinator in post, reasons were well documented, and knowing the context for the data made it more meaningful. Looking at the number of people experiencing a delay in accessing their treatment can be disheartening, and discovering that many of the reasons are outside of the team’s control, such as patient choice, or low lymphocyte counts, helped contextualise the findings.

‘It’s really shown me the importance of keeping good records, and to keep tidy, well-labelled data.’

Talking about the accuracy of data, Natasha raised concerns about the impact that COVID has undoubtedly had on record-keeping this year. Whilst she is interested to see what impact COVID has had on the service, she is aware that the data for this year might not be reflective of reality.

Specifically thinking about Blueteq forms, Natasha pointed out that the changes in decision-making, switching, and staff redeployments could all have impacted the use of Blueteq forms and affected how realistic a picture the data will paint in her audit next year.

‘So many Blueteq forms will have been started and not result in a treatment. I think with the pressure on staff and the service, most people will have been unlikely to go back and delete forms that didn’t lead to treatments.’

Despite the possible limitations, Natasha is clear that undertaking this audit will be an annual goal for her. As a way to monitor progress and see the impact that interventions like e-referral schemes have on time to treatment, as well as to gauge the changes brought about by new treatments like siponimod as they begin to be rolled out.

Tips to start your own auditing process Debate: Do we need to redefine our treatment target in MS – should we be treating beyond NEDA to reduce end-organ damage? - MS Cutting Edge Science 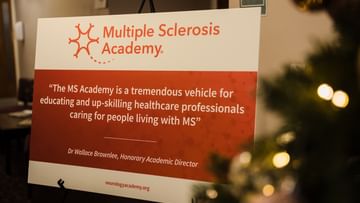 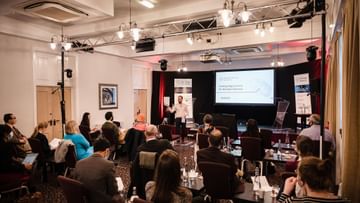