Meeting the societal challenge of dementia

The world is aging, and with age being the most important risk factor in dementia, this is a significant thing to acknowledge. At the moment, over 50 million people are living with dementia and this number is expected to grow exponentially with over 130 million people projected to live with the condition by 2050.The likely increase in numbers is due in part to improvements in both detection and recording, but the biggest reason is simply that we are living for longer. The average lifespan in the UK is over 80 years, and with a longer life comes an increase in the proportion of the population who are older at any given time. Japan, for example, is considered ‘super-aged’ with over 20% of their population over the age of 65, expected to rise to 1 in 2.5 people by 2050.The latest emphasis in health and fitness – as opposed, perhaps, to healthcare – is on measuring, not our lifespans, but our ‘healthspans’ – the length of time we can maintain a reasonable level of health and wellness. The amount of time between where our ‘healthspan’ and our lifespan ends is where many of the challenges in healthcare lie.Whether from the increased numbers of people living with dementia or the way that dementia itself is becoming more personal as more of us know someone affected by it, dementia itself has undergone a shift in image. From a taboo condition, society has moved to an acceptance and a basic understanding of what it is.

We are now beginning to understanding the burden of dementia and are actively working to keep our brains as healthy as possible for as long as possible.

Dementia affects cognition, function and behaviour to varying degrees in different people and worsens over time. Memory difficulties or barriers to thought processes might be the biggest challenge for one person, whereas the learned functions we often take for granted like getting dressed or driving can become difficult for others. For some people, changes in mood, motivations and social preferences may make them seem a completely different person.This array of experiences has a notable impact on an individual’s quality of life, and that of their family as they begin to need increasing amounts of care and support. Someone living with dementia has a reduced life expectancy and a likelihood of dying three times higher than someone without dementia. Alzheimer’s disease (a sub-type of dementia which some suggest should now be classed as a brain condition in its own right) is the 5th highest cause of death in over 65 year olds.The costs associated with health and social care for people living with dementia are high, and with the projected increase in disease prevalence comes an enormous price-tag. In Japan, for example, the cost of care is expected to have almost doubled between 2012 and 2025, where it is expected to come to around 20 trillion yen, or £200 billion.Whilst treatment and support for people with dementia and their families is undoubtedly necessary, it is clear from the scale of the challenge that prevention must be the goal. For example, a study looking at prevention of onset of Alzheimer’s disease by just 5 years found a projected 41% lower prevalence and 40% lower cost in 2050.The Lancet Commission 2018 found that over one third of dementia cases might be theoretically preventable, with 35% of dementia cases being linked to nine lifestyle-related risk factors including smoking, obesity, physical inactivity and late-life depression. This highlights an irrefutable link between the healthiness of an individual and their likelihood of developing dementia, suggesting that a healthier society could mean a decrease in dementia incidence.Our global society, however, is leading a lifestyle which is increasingly sedentary and is causing a continued rise in obesity. Mid-life obesity specifically is expected to increase dementia incidence by 9% in the USA and 19% in China, and the UK not only shares this overarching risk factor for dementia, but is found to be leading the trend.Treatment and support to people living with dementia and Alzheimer’s disease are clearly essential for right now, but to ultimately meet the challenge dementia poses, we need to focus on increasing our global ‘healthspan’ to better catch up with its lifespan. Until we do, it seems the challenge will only continue to grow. 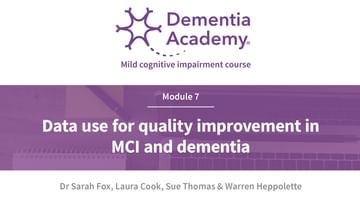 Module 7 - Data use for quality improvement in MCI and dementia