In NHS Grampian we hold weekly MS relapse clinics in assessment rooms next to the Neurology ward. Patients self refer into these clinics via telephone contact with the MS specialty nursing team. Neurology junior doctors under the supervision of the on call General Neurology consultant initially assess the patients and they often have senior review thereafter.

Any acute treatment, therapy referrals, imaging requests and follow up referrals are arranged at this stage. Although the system allows for rapid clinical assessment there is the potential for loss of continuity, as the patients outpatient consultant will often not be directly involved at this stage.

1. To audit the MS relapse clinic assessment in comparison to NICE guidelines

2. To audit the spectrum of cases assessed in the relapse clinic

3. In the era of evolving MS DMT options to audit the departments practice in following up, investigating and escalating DMT treatment in patients with active MS.

A retrospective audit of patients attending the MS relapse clinic over a one year period were assessed (May 2018 – May 2019). Records, results and follow up dates were reviewed from the boards clinical portal system (TRAK), which routinely records this information. The MS nursing records of telephone consultation were not recorded on the same computer system and so were not reviewed in the audit.

74 patients were assessed in the MS relapse clinic between May 2018 and May 2019. All patients were offered assessment within 7 days, based on the clinic booking process and the fact there were no oversubscribed clinics.

Overall ages range of all patients seen in the relapse clinic:

Only 26 of the 74 patients had either clear documentation of an infection screen having been undertaken or evidence of such testing within the hospital laboratory system.

However, as patients attend from a wide geographic area some are likely to have had such testing from their GP practices not viewable on the hospital lab system. However, most practices within Aberdeen city send their samples to the hospital laboratory, making it likely a number of patients were not screened for infection.

45% (33/75) of patients self -referring to the relapse clinic actually were ultimately were diagnosed with a new MS relapse. This is a reasonable proportion and among the other patients there were several with treatment changes following assessment. The proportions are inline with those of the published Cardiff MS relapse clinic cohort (Tallantyre et al, JNNP, 2015)

The patients diagnosed with new MS relapses tended to be younger than the overall population of patients seen.

Motor symptoms and signs were the most common reason for patients to present with relapses. The next most common presentations were those recorded as suggestive of spinal or brainstem presentations. These proportions differ significantly from a prospective series of patients presenting with CIS or MS relapses to clinics in Leipzig (Stoppe et al. 2017).

It seems likely that these relapses were more disabling than for example sensory, cerebellar or visual relapses prompting the patients to contact their MS nurses to be seen. Patients with less disabling relapses may have waited for their next routine follow up appointments to discuss these episodes. Patients with visual episodes were likely assessed by ophthalmology and their consultants contacted via that route, accounting for the main differences in proportions between ARI and Leipzig.

Only four patients diagnosed with new MS relapses did not receive methylprednisolone. One had been treated by their GP, 2 had sensory relapses and 1 refused steroid treatment. 9 patients were also referred for clinic based our outpatient therapy after their relapse.

There was a spectrum of time until patients had their next consultant follow up having been seen in the MS relapse clinic. Only 4 patients (12%) were seen or had their follow up booked over 6 months from being seen in the MS relapse clinic. The availability of follow capacity will vary between clinicians.as will the level of perceived clinical priority for individual patients.

MRI undertaken within 6 months of relapse

Change of DMT treatment after relapse

A number of the patients having a change in MS treatment were starting DMT treatment for the first time (8/15).

Current potency of DMT treatment in patients after a relapse

In the 33 patients seen in the MS relapse clinic diagnoses with relapses there is a spread in prescription and potency of their current DMT therapies. Despite presenting with a relapse 33% of patients were not on a DMT therapy. I did not however take the details of the timing between relapses, the level of recovery or their severity, which will have influenced treatment decisions. There was a clear trend towards the MS specialists looking after patients on the Highly effective (MS trust decision aid 1.3) medications. However, this finding will be significantly skewed by the department policy that patients with highly active MS be taken over my one of our 2 MS specialty consultants.

Cause of presentation with symptoms of MS.

Nature of symptoms relating to MS

Poorly controlled pain and spasticity symptoms were the most common established MS symptoms to lead to assessment in the relapse clinic. We are fortunate enough in MS Grampian to have rehabilitation colleagues who often manage these long-term issues. However, the recent reduced capacity of this service may have been one reason for patients seeking assessment in this way. The majority of these patients had suggested medication changes or referral for therapy input after their consultation.

The NHS Grampian relapse clinic arrangements mean all patients are assessed within 7 days and commenced on appropriate treatment directed by the oncall Neurology team. However, infection screening was not always documented. Although the majority of patients had clinical follow up with their consultant and an updated MRI within 6 months (88% and 58% respectively) this was not always the case. 15 of the 30 relapse patients (50%) who had been clinically reviewed had an escalation of treatment. However, in 10 of the 30 (33%) relapse cases whose follow up had been undertaken there was no change in their DMT treatment. The potential for alteration in treatment was always documented as having been discussed. The number of consultants involved in prescribing MS drugs in Grampian increases the potential for variance in prescribing habits and emphasis when discussing DMT treatment options. 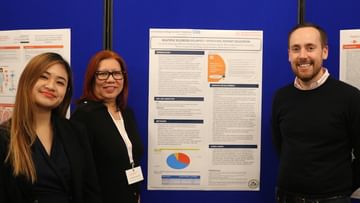