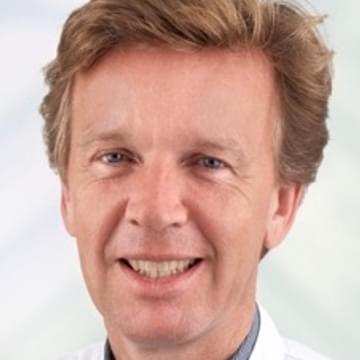 Frederik Barkhof received his MD from VU University, Amsterdam (NL) in 1988 and defended his PhD thesis in 1992, for which he received the Philips Prize for Radiology (1992) and the Lucien Appel Prize for Neuroradiology (1994). Since 2001 he serves as a full Professor in Neuroradiology at the department of Radiology & Nuclear Medicine at VUmc. In 2015 he was appointed as full Professor of Neuroradiology at institutes of Biomedical Engineering and Neurology at UCL in London (UK) to translate novel imaging techniques. In 2018 he received the John Dystel Prize by the AAN and NMSS for his unique contributions to MS research. In 2019, he became a senior fellow of the ISMRM.

Prof. Barkhof was the chairman of the Dutch Society of Neuroradiology and the MAGNIMS study group for many years. He is leading the Queen Square MS Centre Trial Unit, involved in analysis of multicenter drug trials. He serves on the Editorial boards of Radiology, Brain, Multiple Sclerosis Journal, Neuroradiology and Neurology. He is a fellow of the Royal College of Radiology.

His research interests focus on white matter disease, ageing & dementia and glioma. He (co)authored >1100 papers referenced in PubMed, has an H-factor of 167 (Google Scholar) and is listed among 3000 most influential scientists world-wide by Thompson-Reuters. He is the author of the books “Neuroimaging in Dementia”, “Clinical applications of functional brain MRI” and “Clinical Neuroradiology – the ESNR textbook”

Cumulatively, he has received >25 million euro of grant money from various national and international funding agencies and performed contract research for all major pharmaceutical companies with cumulative contract value of > 15 million euro. More than 60 PhD students graduated under his supervision and 4 of them have subsequently attained a full professorship.

Prof Frederik Barkhof is a contributor to the following academies