In April 2019, 9 different MS disease modifying treatments (DMTs) are available for the treatment of patients with relapsing remitting MS. Whilst the NHSE algorithm guides clinicians between differing treatment options, at every stage of the disease there remains an element of choice. The DMT eventually chosen is usually decided by a discussion between the patient and the clinician, and it is widely recognised that clinician preference influences the final choice.

In 2015, the term “unwarranted variance” entered the NHS arena with the publication of the Carter report, which stated that reducing unwarranted variation could potentially save the NHS upto £5bn. But not all variance is unwarranted, but without measuring variance, it is not possible to see where differences lie, and we cannot explore why these difference may occur.

Blueteq data was downloaded for patients newly started on DMTs from 1st April 2018 to 31st March 2019, for each of the centres being analysed. The centres and consultants were then anonymised for the purposed of this audit.

For each centre, the results were then sorted in excel by consultant by DMT to allow ease of analysis. The number of patients started on each DMT was then recorded and the following results shown.

When looking at the different consultants, at each centre the following found: 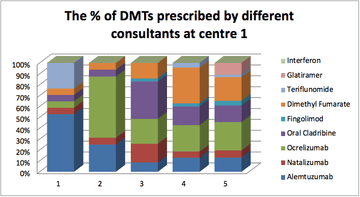 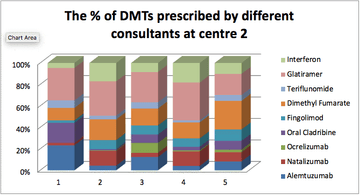 When analysing the centres in their prescribing habits, by grouping treatments using injectables, 1st line oral, 2nd line oral, and monoclonals as the groups. It was found:

It is important to acknowledge, that in both of these tertiary centres, some of the clinicians may be practicing in other DMT prescribing centres and therefore, the prescribing at the centre represented does not represent their full patient population.
The variance in between groups may also occur due to lack of infusion capacity for the monoclonals and the use represents patients who have started on this treatment, not those patients on a waiting list.

When looking at the variance of prescribing among centres, it is important to recognise that centres with multiple MSologists may have variance between clinicians. At the MS Academy – raising the limits in July 2019, it is hoped that all DMT prescribing centres in England will be able to submit data to allow comparisons not only between centres but also between clinicians at each centre. To aid this, a guide to collating the data from blueteq will be produced and circulated to all centres prior to the event. This will allow benchmarking between MS prescribing centres and also different clinicians.