The Royal United Hospitals Bath NHS Foundation Trust is a district general hospital providing care for a catchment population of around 500,000 people. The multiple sclerosis (MS) team at the RUH consisted of a neurology consultant and a specialist MS nurse until January 2022 when a new neuro-pharmacist role was integrated to assist specifically with disease modifying treatments (DMTs) for MS and compliance against NICE NG220 standards (NICE, 2022). The team are responsible for timely review and regular provision of DMT prescriptions for 158 patients, which may only be supplied via homecare services in line with local funding arrangements.

There are no specified targets by which treatment with DMT should be initiated, however the Association of British Neurologists (ABN) recommend starting treatment in eligible patients as early as possible (ABN, 2015). It was noted that an increasing number of patients were making contact with the team regarding significant delays to treatment being delivered to their homes following treatment decision in clinic. As such, we set out to identify how we could improve time to receiving treatment.

The aim is to reduce time from MDT treatment decision to the patient receiving the DMT. Initial focus was on newly started DMTs. Baseline data measured the time taken at each stage of the prescription process between December 2021 to July 2022. Analysis of the baseline data will identify where delays are occurring and inform where interventions can be implemented for improvements to be made. If successful, a reduction in the time taken to delivery will be seen.

Baseline data involving 32 prescriptions shows potential delays occurring at each stage of the process. The greatest limiting step was turnaround from the Homecare company with 69% of prescriptions failing to be delivered within the target 10 working days from prescription collection. Unfortunately, this limiting step is outside the controls of the RUH.

Delays in prescription writing from MDT decision and prescription screening were felt to be due to lack of staff availability and pharmacy workload pressures. The most significant delays were due to communication issues between the MS team and RUH pharmacy or the Homecare company. There were two cases where treatment delay was due to outstanding pre-treatment bloods. Two interventions were proposed:

This would allow any member of the MS team to pick up prescription queries and avoid delay in response. Unfortunately, due to pressures within the IT department, the dedicated inbox has not yet transpired.

Pharmacy department pharmacists were struggling to screen new DMT prescriptions as they did not have access to treatment decision documentation. The integrated neuro-pharmacist would have access to this could resolve queries more easily due to closer connections to the neurology department.

Initial re-audit data of 15 prescriptions has demonstrated improvements in the prescription journey following the neuro-pharmacist intervention. We plan to continue re-auditing this data to confirm the success of this intervention.

We anticipate the introduction of a dedicated MS team email inbox will provide further improvements through improved communication. 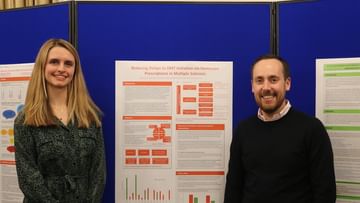