Cutting Edge Science – Where are we going with medications? 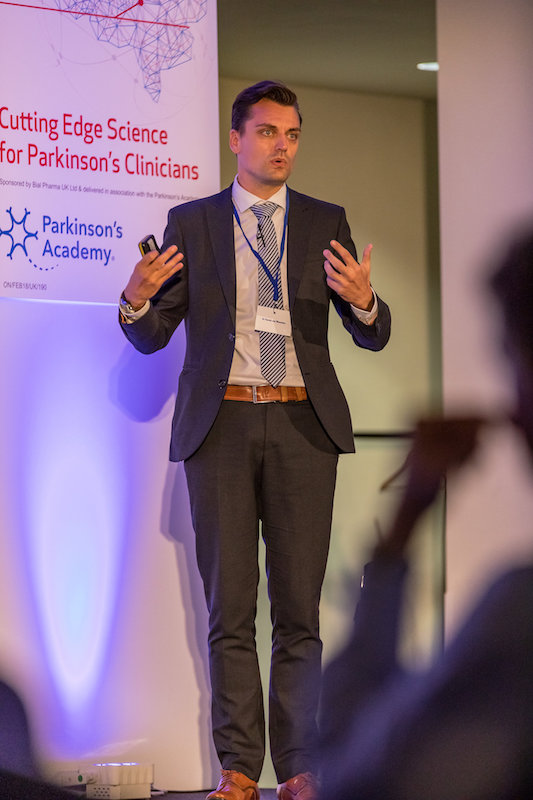 Dr Daniel van Wamelen (King’s College London) took the audience on a whirlwind tour of the available and potential new therapies for Parkinson’s. Starting with the available therapies, Dr van Wamelen noted that the new NICE guidelines continue to recommend a choice of MAO-B inhibitors COMT-inhibitors, or dopamine agonists as adjunct therapies for levodopa motor therapies.1 Looking at the MAO-B inhibitors, Dr van Wamelen described recent meta-analyses using networks of direct and indirect comparisons that have shown adjunct selegiline to be superior to rasagiline with respect to motor outcome; however, more data is required to draw firm conclusions on the new MAO-B inhibitor safinamide.2 In terms of COMT inhibitors, Dr van Wamelen noted that entacapone is a common first-line strategy for the management of wearing-off, but like the MAO-B inhibitors, reductions in daily OFF-time are moderate (mean of 36 minutes across clinical trials3) and it has to be given with each levodopa dose. As an alternative, recent studies with the new COMT inhibitor opicapone, show that opicapone given once daily reduces OFF time by about an hour versus placebo4, 5, increases ON time without troublesome dyskinesia, and is non-inferior to entacapone given with each levodopa dose.4 Patients who were originally treated with opicapone 50mg in the double-blind phase of the active-controlled study maintained their efficacy over one year, and interestingly, switching from entacapone to opicapone led to a further decrease of about 40 minutes in OFF-time by the end of one year open-label follow-up.6 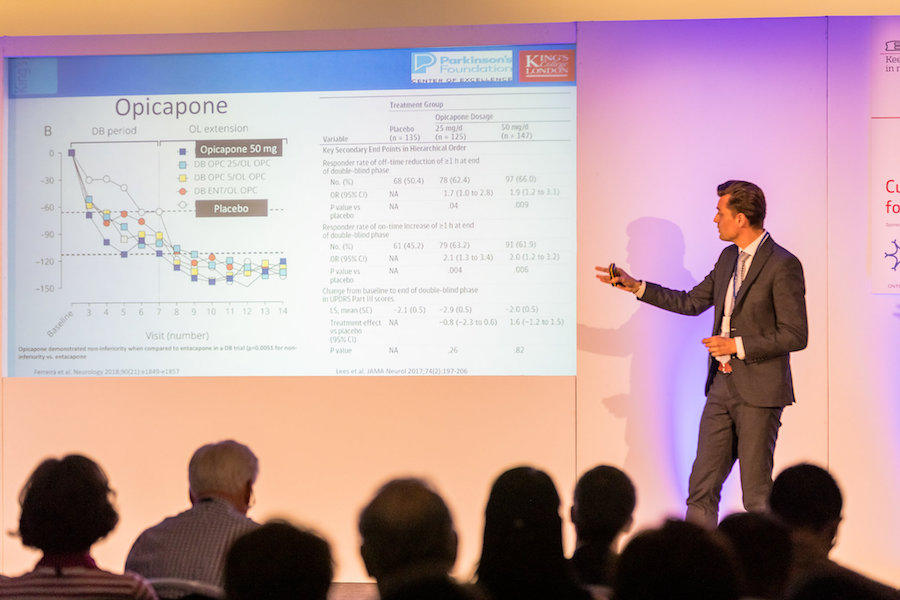 With regards to advanced disease, Dr van Wamelen gave an overview of the non-oral therapies such as apomorphine and intrajejunal levodopa infusion. In an open-label study, both levodopa and apomorphine infusion provided robust improvement in motor symptoms, motor complications, quality-of-life, as well as some non-motor symptom improvement. Levodopa infusion appeared to provide better control (vs. apomorphine infusion) of sleep/fatigue, gastrointestinal and urinary problems, whereas treatment with apomorphine mainly improved mood, apathy, perceptual problems, hallucinations, attention and memory and urinary domains.7 Both levodopa and apomorphine are ‘old’ drugs currently undergoing reformulation for new applications. Dr van Wamelen described the development of ND0612 which is a liquid levodopa designed for non-invasive, subcutaneous infusion.8 A sublingual formulation of apomorphine is also under development as a rescue therapy.8Closing his presentation by looking much further into the future, Dr van Wamelen discussed the development of non-dopaminergic strategies such as the iron chelator deferiprone9, caloric vestibular stimulation10 and the development of alpha-synuclein antibodies11 as promising new treatments for this devastating disease.