In the last issue, I was given the opportunity to tell you about OPTIMAL: an online resource developed by University Hospital Southampton (UHS) and Poole Hospital NHS Foundation Trusts, aiming to improve management of Parkinson’s medication when patients are admitted to hospital for any reason.Readers of this publication will be all too aware of the risks of medicines mismanagement in this vulnerable group, and in particular complications that can arise if doses are missed due to poor swallow, poor absorption or being nil-by-mouth. For the non-specialist clinician, Parkinson’s medication can be bewildering, existing guidelines and dose conversion charts cumbersome and confusing, and signs of dopamine withdrawal difficult to recognise.A retrospective audit of patients with Parkinson’s Disease admitted to UHS earlier this year revealed that a staggering 97% missed at least one dose of their Parkinson’s medication while in hospital, with an average of six missed doses per patient. In many cases patients missed their doses whilst nil-by-mouth, although more often the reason was not clear from the notes. Fewer than 10% of these patients received drugs via a nasogastric tube or transdermal patch as an interim measure. A small number suffered clinical complications as a result, with a larger number having a prolonged length of hospital stay. 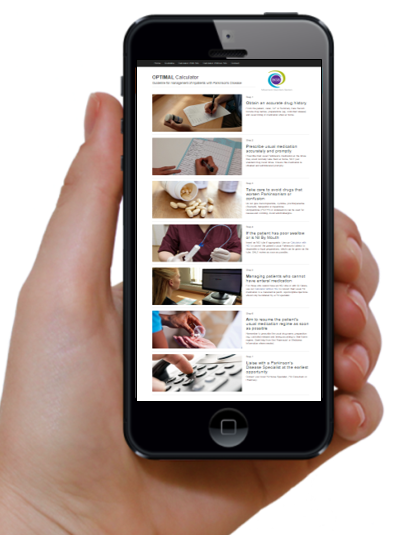 OPTIMAL is a simple, online, 7-step guideline with two interactive calculators that can be used to temporarily convert a patient’s usual Parkinson’s medication into dispersible preparations suitable for nasogastric administration, or to a transdermal patch if more appropriate. It also offers advice on prescribing in Parkinson’s, and prompts a return to their usual regimen at the earliest opportunity. Aimed at non-specialist clinicians, it is intended to provide a holding measure until a specialist opinion can be sought.We are grateful to the British Geriatrics Society Movement Disorders Section (BGS MDS) for their endorsement, and to those of you who have contacted us in the last year offering your support and feedback.It has taken longer than initially anticipated to roll out and embed the new guideline at UHS; as a result the post-implementation audit is still underway, but we have been able to update the resource based on feedback from users. Latest features include an option to print PDFs of drug conversions for filing in patients’ notes (see above), and functionality on tablets and mobile devices (see left). We are also working with our developer to create a downloadable app to improve accessibility.

The project has attracted considerable interest from the start, and the enquiries we have received both locally and nationally over the last year have reinforced the case for OPTIMAL to be made available throughout the UK. Its national launch via the Parkinson’s UK website had been delayed to enable fine-tuning, but is scheduled for early 2016. Individual organisations may wish to have a direct link to it from their own intranet sites. Look out for further details from the Excellence Network and the BGS MDS in the new year.Think Parkinson’s. Think OPTIMAL. Get it right, right from the start.Dr Naomi Fox Consultant Geriatrician, Poole Hospital NHS Foundation Trust Correspondence to: naomi.fox@poole.nhs.uk