Idiopathic Parkinson’s disease is a Dopamine deficient state of the Substantia Nigra Pars Compacta of the central nervous system characterised by clinical signs of bradykinesia and tremor, rigidity and postural instability. Parkinson’s disease is more than a combination of motor symptoms and there is an association with plenty of non-motor symptoms. Elements of this can be seen in James Parkinson’s ‘Essay on shaking palsy‘ 1 and have been brought into clinical practice by Ray Chaudhuri et al 2.

To understand the extent of loneliness and social isolation amongst people with Parkinson’s disease I began to design a questionnaire that can be used in conjunction with the non-motor symptoms questionnaire (Ray Chaudhuri 2) that we have been using. I began this process at end of 2019.

Initially, For social isolation I used the single question ‘Are you feeling lonely?’ with an empty box to write ‘yes’ or ‘no’ and I found it is a bit inadequate to enquire about the state of loneliness. I reflected on this and included the English Longitudinal Study of Ageing single question on loneliness (ELSA-1) 8 and the revised University of California, Los Angeles (UCLA) 3 item loneliness scale (UCLA-3) 9 to bring a quantitative element in my enquiry about a completely subjective feeling. The durability, reliability and simplicity of these scales were influential in their selection. I also reckoned that this would be the best way of making our questionnaire aligned with the nationally recommended measures of loneliness for adults 10.

For social isolation, I chose Duke’s Social Support Index (DSSI) 11. This 11 point scale enquires about both social interaction and satisfaction with social support. The simplicity of using this was the main reason for choosing this scale.

To understand more about the impact of loneliness and social isolation, I included a 15 point geriatric depression scale as well 12.

Data collection began towards the end of 2019 and then it was halted due to the Pandemic.

During the period, when we stopped seeing patients in the out-patients – or even making phone calls or video calls, it gave me the time to contemplate on our initial questionnaire and allowed me to make improvements. 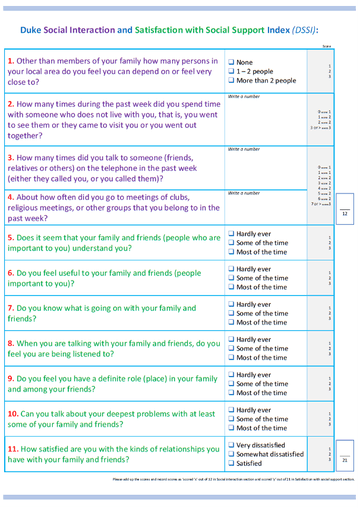