Cutting Edge Science – Do we need to rethink imaging? 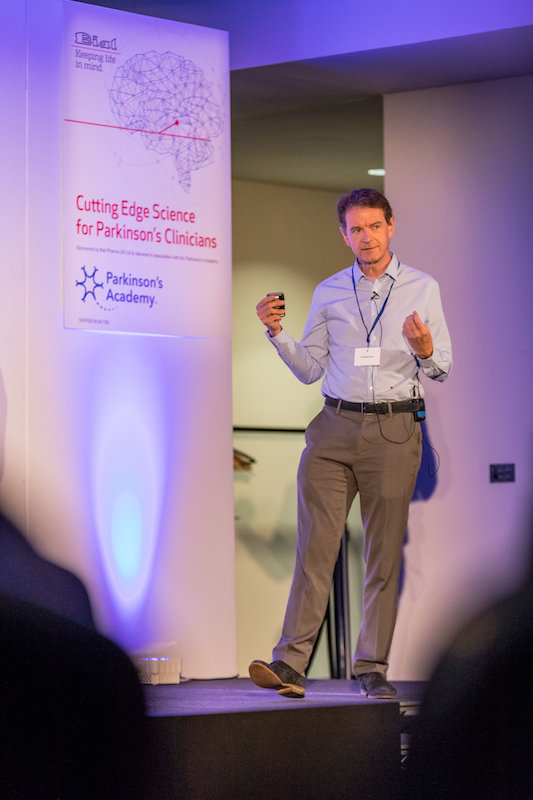 Moving onto imaging, Dr Donald Grosset (Queen Elizabeth University Hospital, Glasgow) called for HCPs working with people with Parkinson’s to rethink how they use imaging within their clinical practice. Like genetics, the imaging field has taken big steps forward in recent decades, and Parkinson’s services must consider how best to make use of these important tools.Dr Grosset reminded the audience that the diagnosis of Parkinson’s remains primarily clinical. However, where there is uncertainty, presynaptic dopaminergic imaging may help with differential diagnosis. Currently, the main technique is FP-CIT SPECT, also known as DaTscanTM. Several UK centres now use DaTscan regularly, and Dr Grosset emphasised that the technology is best used when the clinical picture is incomplete, or where there are pointers to a possible alternative diagnosis, or dual pathology. DaTscan imaging differentiates between parkinsonian disorders with nigrostriatal dopamine degeneration (people with Parkinson’s disease, progressive supranuclear palsy [PSP] and multiple system atrophy [MSA] will have an abnormal scan) and disorders without this distinctive pathology.1Misdiagnosis is an important issue, and even expert movement disorders clinicians make mistakes. In patients with a prominent tremor, DaTscan imaging can help differentiate between Parkinson’s and essential tremor and, in patients with unusual asymmetric tremor, it can help differentiate between Parkinson’s versus psychogenic parkinsonism.1 However, an abnormal scan will not clearly differentiate between Parkinson’s and PSP or MSA. In the face of an abnormal DaTscan, clinicians should consider whether the patient’s clinical presentation and pattern is typical of Parkinson’s or another process. In some cases, structural imaging with MRI imaging may be helpful in identifying PSP (the hummingbird sign), MSA (hot cross bun sign), and Dr Grosset noted that perhaps the most promising diagnostic sign is the loss of the normal “swallow tail” nigrosomal pattern in the substantia nigra on axial imaging.2 It is also vital that clinicians understand that there are always exceptions to the rule. While people with the parkinsonian variant of MSA will typically show an abnormal scan, one in five people with the cerebellar form may have striatal binding ratios within the normal range.3 Likewise, the current threshold for detection on DaTscan means that a proportion of patients with very early Parkinson’s may initially show a normal scan, but the patients later have an abnormal scan.4

Dr Grosset emphasised “We must be very cautious not to base all our decisions on a normal scan - especially if assessing a patient very early on… It is often useful to wait for a repeat scan.”

Looking to the future, Dr Grosset described the advances being made in the imaging of amyloid, Tau and basal ganglia sonography. However, these currently remain research tools only and more work will be needed to incorporate them into clinical practice.

DaTscanTM in the differential diagnosis of movement disorders5