“Walking is part of being human” began Dr Emily Henderson (University of Bristol and Royal United Hospitals Bath NHS Foundation Trust) who went on to note that the Hoehn and Yahr scale is defined by walking and postural instability.1 Indeed, falls in Parkinson’s are a major problem, with over 80% of patients falling by 15 years.2 Dr Henderson explained that falls tend to peak at around 10 years post diagnosis, when the patients are typically still mobile, but with significant walking and balance impairments (i.e. at Hoehn and Yahr stage III). After this, the fear of falling can severely limit the life sphere, and as a result most falls occur in the home. It is therefore no surprise that ‘Balance and Falls’ are the top research priority for Parkinson’s UK.3Although walking is often assumed to become an automatic movement, Dr Henderson explained that dual tasking experiments have confirmed that walking does require frontotemporal function. Both the nucleus basalis of Meynert and the pedunculopontine nucleus undergo degeneration in Parkinson's, with more severe loss associated with cognitive impairment.4 Once gait is threatened (e.g. due to freezing or festination) the brain has to use greater attentional resource, but this is difficult in the presence of a cholinergic deficit. As James Parkinson noted in his seminal essay

“Walking becomes a task which cannot be performed without considerable attention.”

This led to the hypothesis that improving cognition may prevent falls in people with Parkinson’s and Dr Henderson described a randomised, double-blind study of rivastigmine for gait stability. After about eight months of treatment patients treated with rivastigmine showed significantly improved step time variability for normal walking versus those treated with placebo (p=0.002) as well as in simple dual task performance (p=0.045).5

Improving cognition, Dr Henderson noted, “offers a therapeutic target for reduced falls – although Phase III are required to confirm the effectiveness and cost-efficacy of anticholinesterase treatment”. 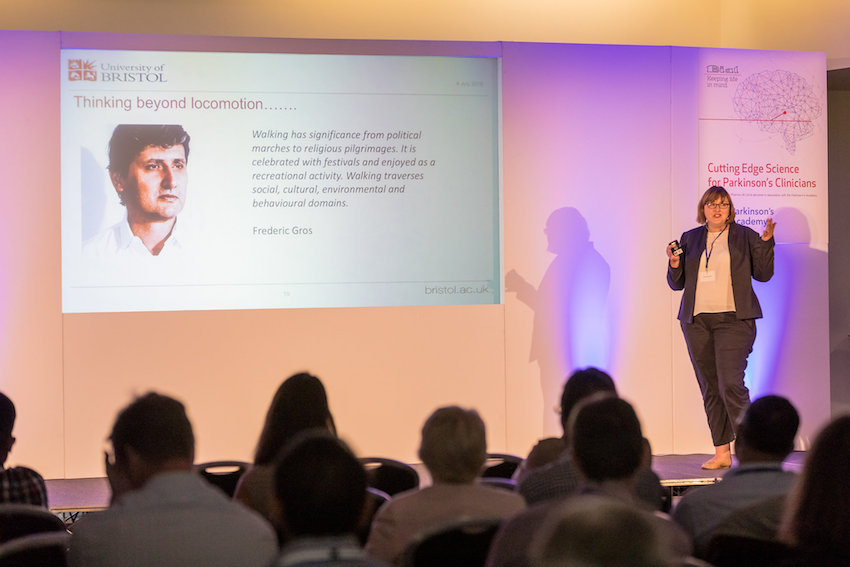