Consultant neurologist Dr Andrea Lindahl found herself among people living with Parkinson’s more than any other condition during her training. She carried out her medical degree research in movement disorders and tremors and found she enjoyed the clinical complexities and challenges of Parkinson’s as well as working alongside the people with the condition.

In 2005 she took the Parkinson’s Masterclass foundation course and soon began her work in Coventry as a clinical lead for Parkinson’s and movement disorders. She learned a lot from the speakers at the MasterClass, though it was the peer network and the mentoring that she especially appreciated.

Her first MasterClass project was a mapping exercise; she researched the services available for Parkinson’s and listened to patients’ experiences through focus groups supported by Parkinson’s UK. Finding that there was no specialist service or clinics for people living with Parkinson’s locally, she began to change this. Five years of lobbying and business case-writing later, there were first two community, then two hospital-based specialist nurses put in post, creating a bespoke Parkinson’s service working alongside Andrea and her colleagues in the neurology department.

Now, as well as two hospital-based nurses, six full and part-time community nurses cover 400-600 patients each across the mixed urban and rural patch. Collectively, the service offers a range of services including clinics for newly diagnosed and complex patients, a telephone clinic, and co-ordination of non-oral therapies such as apomorphine, deep brain stimulation and duodopa. The service also offers community-based clinics across Warwickshire so patients can be seen closer to home.

Andrea is very proud of the service. ‘In 2005, there was nothing. Now we have a multidisciplinary specialist team – a service that was highly commended in the 2017 Parkinson’s Excellence Network awards.’

Individual elements of the service, such as team-working across two of the community nurses, have also won awards, showing the exceptional work of each person involved in this cohesive team. 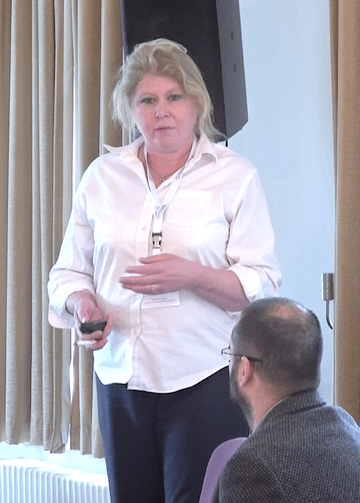 Andrea at an MS MasterClass 2017

Andrea, alongside colleague and joint lead Dr Lucy Strens, founded a clinical network to help with cross-team working. ‘It is still the nurses who are the main link between hospital and community services,’ she says, though the whole team meet face to face quarterly, and liaise closely with Parkinson’s UK staff locally to make sure they are always in touch with how their patients experience their overall care.

Whilst Andrea’s specialism is Parkinson’s, when asked if she would like to take the MS MasterClass, she happily agreed. ‘I’ve actually got the hat-trick in MasterClasses – I’ve done all three: Parkinson’s dementia and MS’ she says. ‘Parkinson’s because it’s my specialism and dementia links into that, of course.’

So why the multiple sclerosis (MS) MasterClass? MS is another very complex neurological condition which, like Parkinson’s, affects the whole of a person’s life, and in terms of optimising care there are many crossovers. Andrea chose to compare data across MS and Parkinson’s for her MS MasterClass project, looking at avoidable hospital admissions. Common reasons for admissions include urinary tract infections, constipation and falls, all which can often be avoided through prevention or early intervention.

The project, which was Runner Up in the 2017 MS MasterClass awards, found ways to improve services that would benefit both patient groups; things like education, fluid and bowel management and closer working with the continence team. ‘The MasterClasses have been a real springboard for consolidating my learning,’ she says. By completing them all, Andrea has been able to use that learning to improve care for the greatest number of her patients possible.