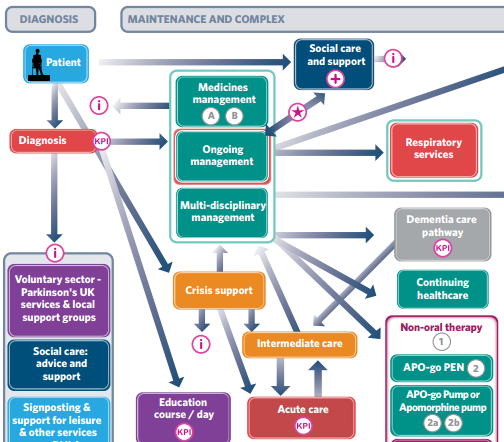 Screenshot of the overview pathway[/caption]A new best practice pathway for the use of non-oral treatments in Parkinson’s has been devised by clinicians to make the referral process for these therapies more explicit.The new guideline pathway, for the first time, gives clinicians a road-map for the use of non-oral therapy (apomorphine, intestinal levodopa gel infusion (Duodopa) and deep brain stimulation). For the right patients, these treatments can be truly life changing.The tool will help clinicians understand referral criteria and the local process for referral. The framework can be tailored to suit any locality and has been developed with the guidance of a steering group of movement disorder specialists, clinicians from the UK Parkinson’s Excellence Network and neurological services commissioners.Central to the pathway is ensuring clinicians know the referral routes for non-oral therapy and to make access fair across the country. It is not good enough that management of Parkinson’s is currently so variable, which means many patients who could benefit from non-oral treatments cannot access them.We spoke to Sue Thomas, founder faculty and speaker at the Parkinson’s Academy who was involved in developing the pathway:

“We are delighted to have been able to develop this pathway for improving access to non-oral treatments. Having one single pathway, relevant to everyone, across all disciplines including all aspects of care, for non-oral treatment makes good sense and ensures better standardisation of treatment for people with Parkinson’s.”

“Non-oral therapies have been an under-appreciated therapeutic strategy for many years but now the issue has become important given some basic understanding of the extra cerebral pathology of Parkinson’s. We now know, as appreciated by James Parkinson himself, that the gut is dysfunctional in Parkinson’s right from the start of the motor disease. There is dysphagia and dribbling of saliva, right from the start of the motor disease in some patients. Continuing oral therapy here puts the patient at risk of aspiration pneumonia a common cause of morbidity in Parkinson’s. Then there is a major issue with delayed gastric absorption due to delayed emptying. This has now been clearly linked to phenomena such as early morning off, delayed on, and dose failures. Oral therapy in this situation may be ineffective. Add to this small intestinal bacterial overgrowth, constipation as well as bowel transit problems. Non oral therapies avoid this route and should form an essential part of the therapeutic strategy in Parkinson’s.”

“The publication of a detailed pathway for the use of non-oral therapies in Parkinson’s is overdue and incredibly helpful. For too long we’ve been using, or trying to use, these treatments in a rather haphazard fashion. Some patients, in some parts of the country seem to get access and some doctors, in some parts of the country, seem to be unaware of them! What we really need is a “best practice” tool to help inform the management of some of the more complex symptoms of Parkinson’s and now we have one.”

Most people with Parkinson’s however will not need this guideline - for many, tablet and patch medications manage their symptoms very well. Furthermore, not everyone who is struggling on tablet medications will benefit from non-oral treatments and, of those who try them, not all will tolerate them.However, for those patients who find their oral treatments are not working well this new pathway means that in the future more patients will have the opportunity to have a discussion with a specialist about whether these treatments might have a role.The non-oral treatment care pathway for Parkinson’s is an interactive PDF which enables clinicians to easily navigate specific elements of the pathway and access relevant documents, governance policy and further information all in one place, and can be downloaded here. The tool will be checked annually for updates (or if major changes occur to policy).

If you would like to know more about this subject, the Parkinson's Academy will be running regional roadshows on non-oral treatments later this year. The sessions will cover: what non-oral therapies are and how they work, what to expect when you make a referral, how to use data, and case histories exploring how to use non-oral therapies. The roadshow is coming to Newcastle, Manchester and Birmingham and other locations will be announced soon - check our roadshow webpage for full details.