Occupational Therapy is a holistic form of therapy based on a Biopsychosocial approach. Parkinsons is definitely a Neuro psychiatric condition. The more I network within the Parkinsons professionals community the more I realise the provision of OT specifically for People with Parkinsons is limited. Patients are receiving intervention from generic neuro OT’s at best and sometimes community therapists with limited knowledge of the condition let alone specialist knowledge about the cues and strategies used to manage the condition.

There is insufficient evidence also around Occupational Therapy intervention across the board with very few within Parkinsons. NICE identified 1,263 publications concerning OT and Parkinsons in a systematic search to inform the update of its national guidelines. A refinement of these found with regard to inclusion and exclusion criteria for NCIE produced only 18 for further examination. Of those 18, 17 were then excluded for having inappropriate design or not being OT specific. A study by Ingrid Sturkenboom in the Netherlands back in 2014 has been the most widely used so far. The one previous to that was Katherine Deane’s systematic review way back in 2002. OT@ as a profession are poor at completing research which does not help our profession.

I have done a lot of networking around the country and finding an OT who works solely with people with Parkinsons is high on impossible. For someone with Parkinsons it is really important to get some specialist knowledge.

“I have to say in the 7 or so years that D and I have been seeing medical professionals regarding D’s Parkinson’s disease, today was the first time that we actually both felt a sense of confidence in that we were not just another patient. I truly appreciate that and I know D walked away from today with a whole new level of confidence about things. You were a breath of fresh air for us, especially D. We had never had the opportunity to spend as much time just chatting about some of the challenges that D faces daily and with someone that really understood and not only that provided confidence that these areas whilst we recognise will never go away there are options available to help over time. “

This was an e-mail I received after my initial consultation with a patient who had not seen an OT (or Phsyio) before regarding their Parkinsons.

I want to start to prove that getting specialist Therapy as early after diagnosis as possible is both more beneficial for the patient to manage their condition but that it is also more cost effective. To start I wanted to gain an idea of the perspective of OT within Consultants and Nurses who work within the field of Parkinsons disease.

A questionnaire was sent out to all Parkinsons Disease Nurse Specialists via the lead PDNS to their network. I also asked the BGS/MDS committee to send a questionnaire out to all Geriatricians and Neurologists with a Special Interest in Parkinsons. I have spoken to many OTs and teams across the country about their services and the provision of OT.

I received 6 questionnaires back from the Consultants and 18 from the PDNS. Of this around 80% had access to an OT, but of this 80% though, 80% were having to refer out to the community for that provision.
The majority of PDNS referred to OT within the Diagnostic and maintenance staged whereas the consultants were more likely to refer within the maintenance and complex stages.

More interestingly were the reasons for referral. These were predominantly physical and motor issues. The majority referring for reduced ADL’s and hand function. The numbers who were referring for mental health and fatigue issues were reduced. Only 16% of the replies stating they would refer to OT for issues around Sexual Dysfunction. 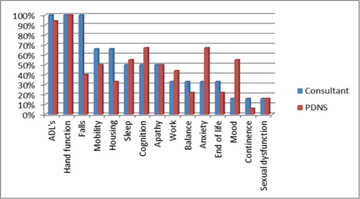 The results show that although OT’s can provide support and advice regarding all of the above symptoms, it is not widely recognised. Most referral to OT are for assistance with ADL’s or to provide equipment. Providing equipment for someone with Parkinsons is not always appropriate and education and advice regarding motor and cognitive strategies would be more beneficial.

Community teams are limited in their provision and can see patients for a limited time, there are usually long waiting lists, hence the referral is usually within the complex phase, when a patient has increased impairment.

It is important for OT’s to increase the profile of our intervention skills and encourage as early a referral as possible. If we can encourage self-management by providing g the right education and advice around the non-motor symptoms aswell, patient should remain well for longer, but also have the autonomy and confidence to manage their condition and recognise when symptoms change, seeking help earlier than crisis.