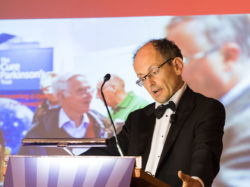 The Tom Isaacs award, set up by The Van Andel Research Institute (VARI) and The Cure Parkinson’s Trust (CPT), recognises a researcher who has demonstrated the greatest impact on the lives of people living with Parkinson’s and/or has involved people with Parkinson’s in a participatory way in their work. The award was created in memory of the late Tom Isaacs (co-founder and former President of CPT) who died in May 2017.Tom lived with Parkinson’s for 23 years. For 18 years he worked tirelessly towards finding a cure, with a pioneering vision and incomparable dedication. Tom became one of the best known Parkinson’s advocates in the world.

“Tom Isaacs was a force of nature. He led the charge to not only find new treatments for Parkinson’s but to cure it entirely, and to include people with Parkinson’s in the process. His good humour, quick wit and empathy drew people to him and inspired them to do what they could to make a difference. The Tom Isaacs Award is our way of celebrating Tom’s legacy by honouring an individual who has greatly impacted the lives of people with Parkinson’s or who has made significant efforts to involve them in a participatory way, much as Tom did.”Patrik Brundin, Associate Director of Research at Van Andel Research Institute.

The winner of the inaugural award was Professor Tom Foltynie, Consultant Neurologist and Researcher at University College, London. Professor Foltynie conducted two clinical trials with the anti-diabetic agent exenatide, both with exciting and promising results, showing that drug repurposing is viable and that treatment to slow Parkinson’s disease could be within reach. Professor Foltynie also sits on CPT’s Research and Linked Clinical Trials Committees, and appeared on CPT’s BBC Lifeline Appeal in 2017.Nominations open on 11th April 2018 and close on 31st August 2018. Any person can nominate, including patients and colleagues, and nominations will be accepted from anywhere in the world. Nominations will be evaluated by a panel selected by VARI and CPT comprising researchers, people living with Parkinson’s and Lyndsey Isaacs, Tom’s wife.The award will be presented at the annual Grand Challenges in Parkinson’s and Rallying to the Challenge meeting on 26th and 27th September in Grand Rapids, Michigan, the PwP research involvement conference that was created by Tom and Professor Patrik Brundin.Submit a nomination