Parkinson’s disease (PD) is a chronic, progressive, neurodegenerative disorder, requiring specialist input to optimise its management. COVID-19 has further impacted on the care of these patients as clinic appointments were cancelled. The referral process to the Parkinson’s team was previously unclear, with some junior doctors unaware the service existed.

A new online referral pathway via CareFlow was created in February 2021 and promoted to medical staff via email, poster displays and demonstrations on the use of CareFlow. There were also dedicated teaching sessions for the ward staff on the inpatient management of patients with PD. All known patients with PD within the trust via CareFlow system were “pinned” to the “BRI Parkinson’s & Movement disorders team” and then a “tag” labelled “Parkinson’s disease” was added , allowing the movement disorders team to be automatically informed of inpatient admissions.

In addition ward teams could raise a referral via CareFlow requesting a review of a patient on their wards, including those with a suspected new movement disorder. Once seen the movement disorder team could edit the referral adding the outcome and raise a task e.g. for a re-review (with a date), communication (letter to the GP). Once a referral was complete it would be marked as “cancelled.” The referral information including reason for referral, speciality referred from and who had seen the patient allowed for simple retrospective auditing of the use of the system. 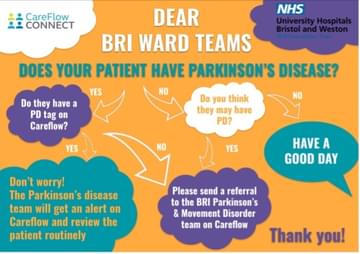 Post-intervention survey results showed a small increase in awareness of the Parkinson’s referral pathway after email promotion with a further increase after displaying posters in prominent locations and delivering demonstrations (from 48%, to 53%, to 75%).

During cycle 2 of data collection, medical staff were also asked why an inpatient Parkinson’s service is important. Common themes included recognising the need for specialist medical input, the importance of regular review of medications and associated symptoms (noting the lack of this during the COVID-19 pandemic) and the multi-disciplinary approach to care.

The introduction of an online referral pathway for inpatient Parkinson’s reviews has led to increased awareness of the service among medical staff at the BRI.

Physician associates were also included in teaching sessions due to their continued presence on medical wards, encouraging retention of this knowledge.

Junior doctors recognise the importance of this service, referring patients for the specialist input integral to managing a complex condition.

Accurate recording on the number of inpatient movement disorder reviews will help with job planning in the future. Acknowledging that there is a paucity of senior medical doctors with an interest in movement disorders, there is scope to look at the role of MDT members with a specialist interest in PD supporting the service.

With unprecedented bed pressures the majority of inpatients with PD are not being cared for on COTE wards making easier access to referrals to specialists even more important.

18.3% of patients died during the admission or in the 30 days after admission showing it is never too early to consider ACP with this patient cohort.

From a staff development perspective when clinics are cancelled due to a pandemic. Supervised inpatient PD reviews are a valuable learning opportunity.