Lewy body dementia (LBD) and Parkinson’s disease dementia (PDD) together account for up to 15% of all dementias. Recognition and management of these dementias, though, is often suboptimal, and people living with them can fall through the gaps in care.

A brand new Academy has been established to try to help close that gap, and on 25th June, our first webinar in dementia with Lewy bodies took place. Dr Tim Rittman, consultant neurologist at Addenbrookes and senior clinical research fellow at University of Cambridge, and Alison Wilkinson, Dementia nurse consultant at Peterborough NHS Foundation Trust, spoke to 183 live attendees on the treatment and management of Parkinson's dementia (PDD) and Lewy body dementia (LBD) - and the session is available on demand now. 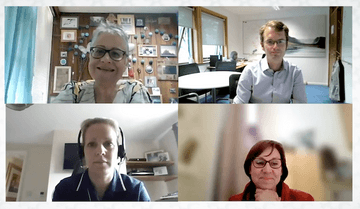 Tim began the session by noting that dementia with Lewy bodies comes with complex motor and cognitive impact and that it is both over and under diagnosed. He then gave a helpful list of all the times that clinicians may be inclined to assume LBD, when it might not be present, including:

He cited McKeith (1996)'s guidelines for LBD diagnosis and outlined hallucinations as being characteristic when they are (usually) involving people who are still and silent, and not usually frightening. Sharing that they often begin as misperceptions (seeing one thing but thinking it is another) and pointed towards Rollins (2019) work on how the type of hallucination can indicate the underlying condition. (For example, hallucinations of animals are less indicative of LBD).

Other key observations to help diagnose LBD; those living with LBD:

have a distinct cognitive profile in LBD - for example, in the Addenbrooke's Cognitive Assessment,someone with Alzheimer's might remember the information to begin but forget later, whereas with LBD they may find it difficult to recall all 7 objects at the start - but the ones they do remember, they will still recall at the end of the discussion.

Table 1: Helpful comparison of cognitive profile between Alzheimer's and dementia with Lewy bodies

Tim encouraged professionals to consider differential diagnoses when diagnosing LBD and to look for its clear cognitive profile, using biomarkers to help rule out or hone down where needed. In closing, he referred to the following key reminders:

Following Tim's talk, Alison Wilkinson, dementia nurse consultant, discussed the challenge of supporting the 'whole person' with LBD, noting that often, there can be an array of healthcare professionals all 'trying to look after their own bit of person'. She was clear that it is essential that everyone works collaboratively to a shared and clear treatment pathway, and gave a very practical overview of optimal management, both pharmacological and behavioural or lifestyle-related.

Noting that most medications given to support cognitive stability are cholinesterase inhibitors (including domeprazil, rivastigmine and galantamine), she warned of the impact these can have on other symptoms such as orthostatic hypotension and bradycardia. She also noted that NICE guidance supports use of Memantine for those who cannot support cholinesterase inhibitors.

Ensuring a global and behavioural psychiatric baseline are taken before starting medication is important, as is regular assessment at around 3-6 months after starting or switching to monitor the effect of the medication, and find the best fit for the individual.

In terms of desisting with medication, Alison advised continuing for as long as the drug is clinically helpful to the individual.

Non-pharmacological support can include cognitive stimulation therapy. Alison highlighted the positive evidence base for this (it is recommended by NICE) noting its cost-efficacy and impact on improved quality of life.

Sharing the benefit of things like exercise, social interaction, use of memory aids and such, she also highlighted the importance of ruling out all other potential causes of apparent cognitive impairment including depression, infection or adverse reactions to medications.

Alison was very clear regarding the risks around using antipsychotics, stating the importance of regularly checking with the person afterwards commencing on these. She particularly suggested watching for decreases in ability and motor function.

Alison began discussing sleep in light of the many lifestyle changes that can support improved quality of sleep, and emphasising that this is the place to start, ran through the basics of sleep hygiene. Regarding REM sleep difficulties, she recommended removing any mimics and ensuring the sleep space is safe for both the individual and their partner.

In terms of pharmaceutical support, Alison suggested quetiapine taken 30 minutes before bedtime, however noted that it can increase risk of falls and cognitive impairment. She also mentioned the potential benefit of prescribed melatonin but cautioned to ensure that, if this is prescribed in clinic, that their GP is happy to continue the prescription, as this seems to be variable.

Neurology Today: use of cardiac imaging in LBD diagnosis (2013) 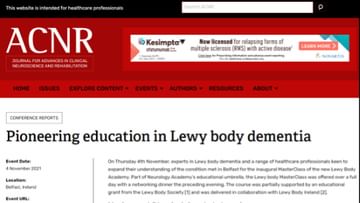 Highlighting the need for education in Lewy body dementia 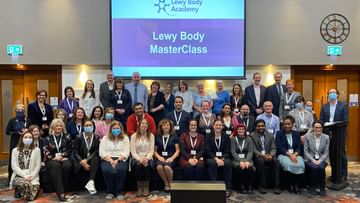 Our first ever Lewy body MasterClass – a success!

Focussing on dementia with Lewy bodies (previously known as Lewy body disease), and Parkinson's disease dementia, this specialist training ensures people with these dementias do not fall through the gaps in care.